This past Saturday, May 1, 2020, the Navy's Bluebirds and the Air Force's Thunderbirds soared over Baltimore and the DC metro area skies in honor of the thousands of doctors, nurses, first responders, and essential workers serving on the front line day-in and day-out during this crisis.

LESSON: At times experience and luck can be the key factors in determining whether your photos will work or not.

The organizers of the event even published a flight path and estimated flight times. However, I knew from having covered events like this one in the past, things happen and flight path deviations can occur. So, I went out knowing there was a 50/50 chance these photos would work or not.

However, in a situation like this one where there are so many factors outside of your control as a photographer, you have to think hard before hand on what choices to make. And once you've done this, then you must stick to your guns. These referred specifically not only to my chosen location but also what gear would I take with me.

For a location, I chose one of my favorite monuments in the DC Metro Area: the Air Force Memorial monument. As far as photographic gear choices, that was a bit more complicated. I knew I needed a big telephoto to get a detail of them in the sky. I knew I needed a medium range telephoto just in case they happened to fly closer to my location. And I never leave the house without a good wide angle. So, I need bringing 2 DSLRs and my mirrorless #nikonZ7 with me as well as an array of lenses ranging from my 14mm all the way up to 500 mm and a 1.4 TC.

At first, I positioned myself in such manner I had DLOS (direct line of sight) to the Washington Monument about three miles just northeast of my position. But at a location where if they flew right atop of me then I could just use my wide angle.

From my vantage viewpoint, the first pass was simply too far away seemed miles away beyond the monument. The same thing happened the second time around.

This is when things started to get dicey. For I knew I’d only get one more chance when they’d head back from where they came from.

I looked around and decided I'd gamble and emphasize more on the foreground than on the jets themselves.  So, I moved closer to a statue depicting an AF honor guard and I said a prayer to the Gods of Photography.

As they flew by at a distance I concentrated on keeping them against a clean horizon while composing the majority of the frame with the foreground elements. After all, I managed to make a sequence with the wide-angle lens and then I quickly switched to my 500 telephoto for a closer look at the birds.

And these are the resulting images, which in my opinion are still too far away but one is unique enough to publish and the other one works as a secondary image and as a good "photo of record." 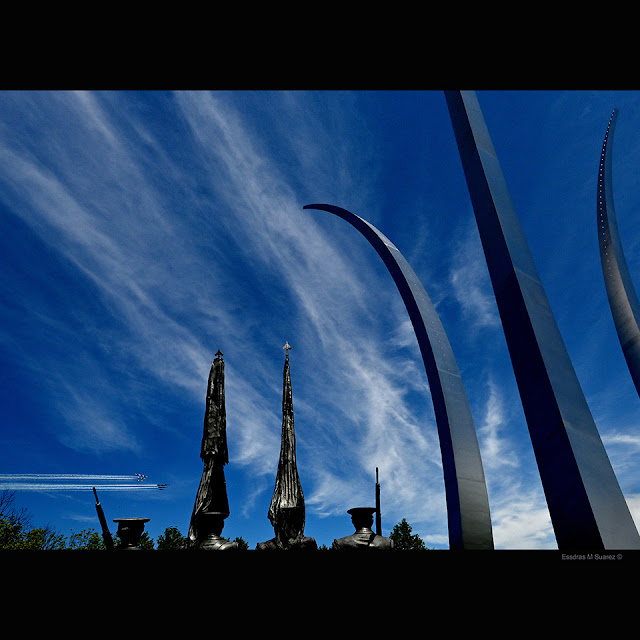 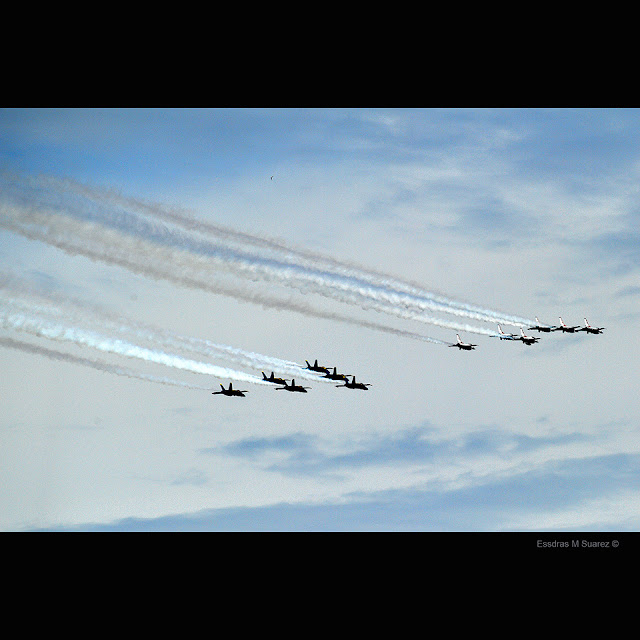 ON SHOOTING FOR THE HIHGLIGHTS

* Exposing for the highlights, one of my favorite techniques, will bring down the mid and dark tones; thus increasing contrast and color saturation.

* In other words, if the camera sensor told me this scene should've been photographed at 1/500th of a second- keeping all other variables the same- I usually override the camera reading and underexpose by a factor of -.5 stop at first, then - 1 stop, then -1.5 stop until I get the desired result.

* Adding a human figure to your composition gives the viewer not only something to relate to but it also gives them a size- reference point.

NOTE:  During these Times of Pandemic, I have made it a point to, every once in a while, visit some of the National Monuments in DC including the Air Force National Memorial in Arlington, VA near the Pentagon. This striking sculpture, which is one of the least known, depicts the contrails of three jets in the "Missing Man Formation."

However, it is very hard to photograph because of its gigantic size, which can only be done with a super-wide lens. Thus, the use of the 14-30 wide-angle lens. 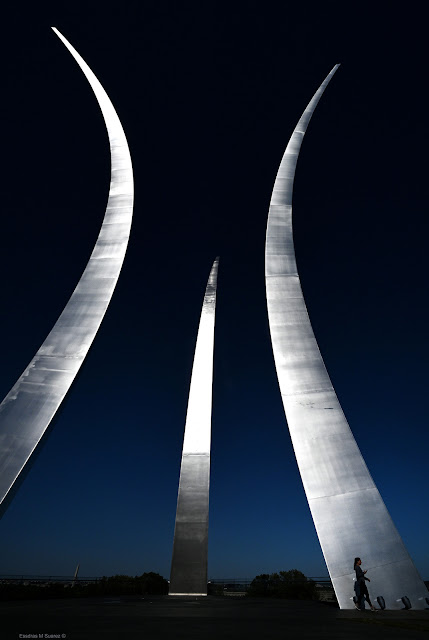 This past Saturday, May 1, 2020, the Navy's Bluebirds and the Air Force's Thunderbirds soared over Baltimore and the DC metro area ...

Essdras M Suarez
I'm not a specialist. I'm a generalist. I am photography. I am the people, places and things I see through my lens. I am the seasons, I'm the flavors, I don't check a box or fit into a box and I wouldn't want to. I was forged on the trenches of daily newspapers where competitiveness and deadline- driven daily tasks ruled the day. A world where in order to stand out among your peers you must be able to think outside the box and change your approach at a moment's notice. Learning to do just this has won me awards in a myriad of photographic genres. I can adapt to any given situation, to the ebb and flow of any photo assignment or situation. Now that I am in a position to share my knowledge and experience with others, I spend a lot of my time teaching the art of photography.